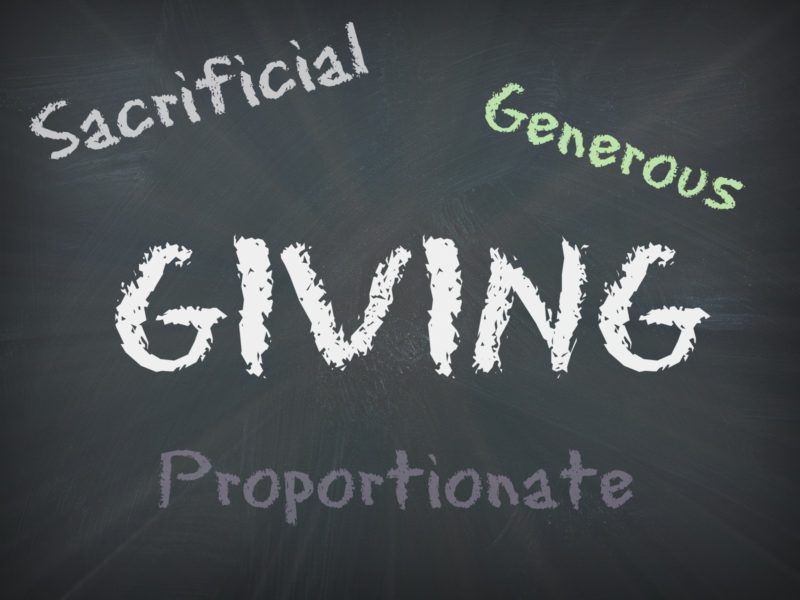 Giving is an issue of the heart and an act of obedience.  Like it or not, we are given a lot of grace and freedom in the area of giving, but there is also a great deal of responsibility that comes with that freedom.  We often approach this topic by looking for a checklist so we can give what we need to and move on.  Scripture doesn’t give us a checklist though, which is ultimately for our own good.

We like it when we’re presented with a list of things to do so we can mark them off one by one knowing that if we get to the end, our mission will be accomplished.  We see a great example of that mentality in the story of the rich young man in Mark 10:17-22.  This man asked Jesus “what must I do to inherit eternal life?”  Here he is asking Jesus for a checklist for salvation.  Jesus even played along for a minute by giving him a list of commandments to which he responded that he has kept them all.  However, Jesus knew his heart and confronted him with one last command.  He said, “’You lack one thing: go, sell all that you have and give to the poor, and you will have treasure in heaven; and come, follow me.’  Disheartened by the saying, he went away sorrowful, for he had great possessions.”  Jesus exposed the condition of this rich man’s heart.  It’s interesting to note that he went away sad, meaning that he wanted to do it, but in the end, he couldn’t part with his wealth.  Luke 12:21 addresses this futility at the end of the Parable of the Rich Fool, after his life was taken, by saying “So is the one who lays up treasure for himself and is not rich toward God.”  The ultimate battle is for our heart and that’s why giving can’t just be a box to check.

So, how much should we give?  The bottom line is - everything.

Once we’ve professed Christ as our Lord and Savior, we need to take His Lordship seriously.  It means that Christ is now our sovereign authority and we need to obey Him in all things.  We have turned our life and our decisions over to him.  In the overall theme of scripture, we find that we are Christ’s in two ways, first by creation and second by redemption.  Not only that, but the things He asks us to do, we know He does for our own good.  Look back at Mark 10:21, just before Jesus asked the rich young man to sell all he has and give to the poor, we read “And Jesus, looking at him, loved him”.  Jesus gave him the command to give all that he had out of love and it was for his own good.  Yet, the man walked away sad because while he wanted Jesus, he wanted his possessions more.  Giving all doesn’t mean that we should necessarily sell everything we own and give it away as Jesus asked of this man.  It means that we should be eagerly seeking ways to use all that we are and all that we have in service to Him.

There are a lot of ways to honor God with our resources even while maintaining ownership.  We can lend our tools out to someone in need.  We can invite others into our homes.  We can also provide for the needs of our family and invest in relationships.  It doesn’t honor God to give away our money while we neglect our family or our marriage.  In Mark 7:6-13, Jesus criticized the Pharisees for putting their man-made traditions above God’s commands.  He specifically addressed the idea of giving money to God that should have been used to care for their parents.  Our financial decisions need to be evaluated in light of what brings the most glory to God and that process requires effort on our part.

There are two extreme schools of thought that can pose a threat in our decision making.

1.  Thinking we need to give every last penny away.  Just like the rich young man, you may be called to give everything away and you need to be willing to do that.  However, it’s not a sin to accumulate wealth.   The pain caused by a tight budget isn’t a good measure of how well we’re honoring God.  Sometimes obedience may require giving more of your time or talents.

2.  Living as if it’s okay to be a comfortable Christian.  In Matthew 16:24, we see the requirement to deny oneself, take up our cross and follow Christ.  The moment we accepted Christ, we gave up the right to live our lives in pursuit of the desires of our flesh.  We’re involved in a spiritual war in the role of a soldier.  Just look at the words of Paul in 2 Timothy 2:3, “Share in suffering as a good soldier of Christ Jesus.”

I’m reminded of the billboards during World War II that asked all citizens “Is this trip necessary?”  In a time when the resources of our nation were needed to fight the war, even the gas used to take a short drive was to be considered.  We need to be evaluating the wise use of all of our resources in this fight that has eternal consequences.  Are we using them for Christ or for seeking personal pleasure in this life?

Our ultimate goal should be to evaluate every opportunity and use all our resources for what will bring the most glory to God, even if that means we don’t give away every available penny because there was a better use for it.

What is the Right Amount?

In 2 Corinthians 9:6-8, we read these words from Paul as he presents the opportunity to give to the church in Judea:  “The point is this: whoever sows sparingly will also reap sparingly, and whoever sows bountifully will also reap bountifully.  Each one must give as he has decided in his heart, not reluctantly or under compulsion, for God loves a cheerful giver.  And God is able to make all grace abound to you, so that having all sufficiency in all things at all times, you may abound in every good work.”  In this verse, he speaks of rewards for the generous giver and the grace of God that will be provided.  His simple instruction is for them to give as they have decided in their heart to give.  In seeking out the decision of our heart, I find three giving principles of scripture very helpful:

1.  Sacrificial Giving – We need to give enough that it hurts.  This is part of denying oneself as we read earlier.  An example we see of sacrificial giving in the Bible is the Macedonian’s gift to the church in Judea, despite their own poverty.  They didn’t just give out of compulsion, they actually begged for the opportunity to give and considered it a privilege.  They understood that this world was not their real home and they chose to invest their money in eternity.

I love the following quote from C.S. Lewis in Mere Christianity, “I do not believe one can settle how much we ought to give. I am afraid the only safe rule is to give more than we can spare. In other words, if our expenditure on comforts, luxuries, amusements, etc, is up to the standard common among those with the same income as our own, we are probably giving away too little. If our charities do not at all pinch or hamper us, I should say they are too small. There ought to be things we should like to do and cannot do because our charitable expenditure excludes them.”

2.  Proportionate Giving – Paul’s instruction to the Corinthians in 1 Corinthians 16:2 was to “set aside a sum of money in keeping with your income” (NIV).  Giving 10% for a person living on minimum wage may be quite a sacrifice, but for the person making $1 million a year, it’s simply giving a portion of their excess.  This is why the idea of everyone giving the same percentage doesn’t make sense.  Our giving should grow not only in amount, but also in percentage as our income rises.  I’ve heard several stories of Christians that were giving away 90% of their income, or more, as a result of living out this principle.

Philippians 2:3-8 – “Do nothing from selfish ambition or conceit, but in humility count others more significant than yourselves.  Let each of you look not only to his own interests, but also to the interests of others.  Have this mind among yourselves, which is yours in Christ Jesus, who, though he was in the form of God, did not count equality with God a thing to be grasped, but emptied himself, by taking the form of a servant, being born in the likeness of men.  And being found in human form, he humbled himself by becoming obedient to the point of death, even death on a cross.”

A life of faithful giving doesn’t happen by accident.  It is a constant, intentional effort to seek the best way to use our resources for the glory of God.  It starts by acknowledging God’s ownership of all that we are and all that we have.  We recognize all assets as tools that should be used to capitalize on the opportunities put before us.  It also requires ongoing prayer and communication between spouses.  And in our obedience, the battle for our heart is won and we are sanctified and conformed to the image of Christ, our gracious Lord, who always has our best interest in mind.  In Luke 12:32-34, he gives us these words of assurance:  “Fear not, little flock, for it is your Father's good pleasure to give you the kingdom. Sell your possessions, and give to the needy. Provide yourselves with moneybags that do not grow old, with a treasure in the heavens that does not fail, where no thief approaches and no moth destroys. For where your treasure is, there will your heart be also.”