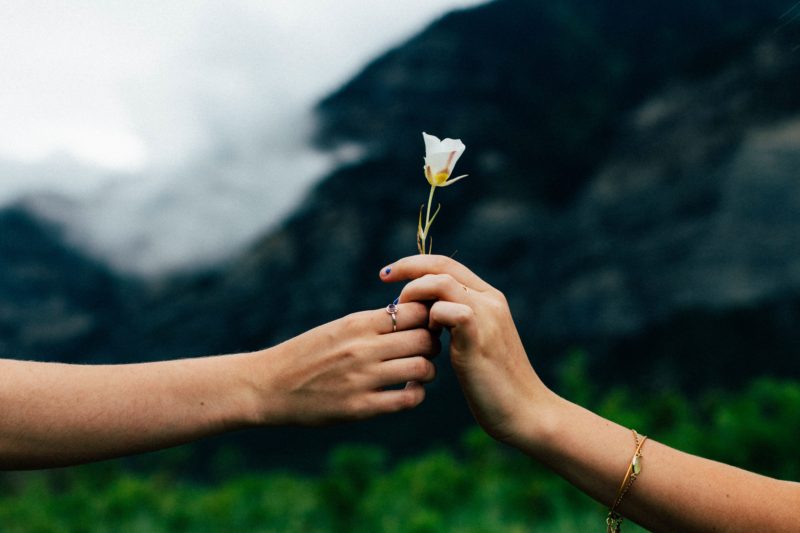 Giving is one of my absolutely favorite topics.  On the surface, it seems like such a simple, straight-forward issue, but when you start to dig in, you find out it is very involved.  Things gets more interesting when you add people to the mix and start working through their pre-conceived notions and biases either for or against the idea of giving.  As we peel back the layers, we get into the essence of who that individual is and ultimately what they truly believe.  Since giving goes straight to the core of what each person believes, I consider this topic to be the most important financial issue a person needs to explore and understand.  All the other financial topics are just the icing on the cake.  When a person fully grasps the theology underlying giving, most other money issues will simply fall into line.

The act of giving is a blessing that is shared by all people around the world, regardless of religion, gender or any other classification.  For the most part, I think almost everyone would agree that giving is a good thing to do.  One of the facets that makes giving so interesting is that the act itself usually goes directly against the selfish nature of the giver and requires them to put someone or something else above their own wants and needs.  This ultimately raises the question, “Why do we give?”

The answer to this question is widely debated and certainly sought after, especially by charitable organizations looking to unlock the key to raising more money for their causes.  Some will argue that the primary source of motivation comes from an altruistic attitude, which simply refers to the selfless act of caring for the welfare of others above your own.  I guess we could sum that up by saying it’s out of love for others and the good feeling that comes along with it.

Other common reasons include a sense of obligation to help those in need, being motivated by a story, or even a response to the suffering of someone else.   That last one may sound a bit odd, but think of how often we support a cause because of a personal loss or suffering incurred by someone we know.  A spinoff of this is the rise in popularity of athletic events, like marathons, used to raise money or the viral appeal of the Ice Bucket Challenge a few years ago that raised over $100 million for ALS.  It’s simply a fact that people give more when suffering is an element of the story.

While the common desire to give is built into each one of us by our Creator, Christians have always been the standard setters when it comes to giving.  As we’ve seen Christianity and culture continue to converge, we’ve also seen secular fundraising tactics entering into the Christian giving discussion.  In reality, the giving motives of a true Christian should be noticeably different from the rest of the world.  There’s a depth to Christian giving that goes well beyond the reasons mentioned above and while those reasons may play a small role, scripture paints the real picture for why we choose to give.  Let’s explore the reasons God has given us.

Scripture commands us to give, therefore not giving would be an act of disobedience.

Romans 12:13 – “Contribute to the needs of the saints and seek to show hospitality.”

Hebrews 13:16  – “Do not neglect to do good and to share what you have, for such sacrifices are pleasing to God.”

1 John 3:17-18 – “But if anyone has the world’s goods and sees his brother in need, yet closes his heart against him, how does God’s love abide in him?  Little children, let us not love in word or talk but in deed and in truth.”

Most people want to immediately jump to the question of how much we should give, but we’ll get to that in a later article.  For now, know that not giving is not an option.

In addition to being an act of obedience, giving is essentially our faith put into action.  When we give, we’re acknowledging that God is greater than whatever we’re giving up.  We see a couple of examples of this illustrated in the Bible.  In Hebrews 11:26, we read that Moses “regarded disgrace for the sake of Christ as of greater value than the treasures of Egypt…”  Moses understood that all the treasures of this world paled in comparison to the riches of God.

There is a lot in those three verses, but for now, we can concentrate on the most important detail, which is the understanding of the incomparable value of the kingdom.  Both parables liken the kingdom of heaven to something of great value, that when found, each man sold all they had so they could purchase it.  If we truly believe the Bible, it would be illogical to hold onto the things of this world instead of giving them up for something much greater.

“He is no fool who gives what he cannot keep to gain that which he cannot lose.” – Jim Elliott

God Gave to Us First

When we grasp what God has already given to us, we should gladly turn over the control of all we have to Him.  We were dead in our trespasses and He sent his perfect, spotless Son to die a sinner’s death on the cross to take the punishment for our sins.  As you can read in my previous article “The Greatest Debt Payoff Ever”, we owed a debt we couldn’t possibly repay and He paid it for us.  Consider the debt you feel when someone performs a good deed for you.  That doesn’t even begin to explain the debt we should feel for what Christ did for us.

2 Corinthians 2:8-9 – “For you know the grace of our Lord Jesus Christ, that though he was rich, yet for your sake he became poor, so that you by his poverty might become rich.”

Paul is pointing out that Christ left his place with God and came to the world in human form, laying down His divine riches.  He then died on the cross like a criminal so that we could be spiritually rich as joint heirs with Christ (Romans 8:17).

As a result of God’s gift of salvation, we received that gift of immeasurable value.  Our giving acknowledges and gives thanks for the great wealth that we’ve been given through Christ.

Giving Keeps Our Focus on God

Matthew 6:21 -“For where your treasure is, there your heart will be also.”

We always need to be aware of our real treasure.  Is it the things we buy?  Perhaps our treasure is in our investment accounts.  It is understood that we need to use some of our money to buy things and we probably have reasons we need to save as well.  However, we have to be careful that we’re not erring toward materialism or hoarding our money.  Once we’ve purchased what we need and have saved for our specific future needs, we should give the rest away to protect our hearts.  John Wesley once said, “Money never stays with me.  It would burn me if it did.  I throw it out of my hands as soon as possible, lest it should find its way into my heart.”  Greed ultimately gets us nowhere in the end anyway.

Proverbs 28:22 even says, “A stingy man hastens after wealth and does not know that poverty will come upon him.”

Giving is the best way to protect our hearts from greed and materialism.

God Owns It All Anyway

Some people look at Christian giving as returning to God His portion and then go on to spend the remaining amount as if He has no interest in it.  In reality, the Bible tells us that it’s all God’s.

Colossians 1:16 – “all things were created through him and for him.”

We should not only be thankful and give a portion to God, but also seek to use the rest for His glory.  After all, we’re simply stewards of God’s things while we’re here and someday we will give account for how we managed it.

Giving Brings Thanks and Praise to God

2 Corinthians 9:11-12 – “You will be enriched in every way to be generous in every way, which through us will produce thanksgiving to God.  For the ministry of this service is not only supplying the needs of the saints but is also overflowing in many thanksgivings to God.”

It’s God’s economy and even though we may not always understand why certain things are happening, we can rest assured that He is in control.  Why should we think that just because God has blessed us financially that we should use that money to indulge ourselves?  We should be using all that we are and all that we have for His glory.  Sometimes, God is giving to us so that we can in turn give to others, ultimately bringing thanks and praise to Him, the provider of all things.

Giving Demonstrates Our Love for Each Other

2 Corinthians 8:14-15, “your abundance at the present time should supply their need, so that their abundance may supply your need, that there may be fairness.  As it is written, “Whoever gathered much had nothing left over, and whoever gathered little had no lack.”

Christians have long been recognized by the world for the aid they provide to those in need.  Tertullian is quoted as saying, “It is our care of the helpless, our practice of loving kindness that brands us in the eyes of many of our opponents.  ‘Only look,’ they say, ‘look how they love one another!’”

This is only a partial list, but it should already be obvious that giving is so much more than simply grabbing for your wallet as the offering tray comes by to see if you have a few dollars to drop in.  Giving is a demonstration of our faith through action.  We’ll continue to explore the reasons why we give in Part II of this article and will also take a look at some other reasons people give that shouldn’t be the primary source of motivation for a Christian.

Posted in Giving and Donations and tagged Charity, Donation, Giving, Offering, Why
← Protecting Yourself from Identity TheftWhy Do Christians Give? – Part II →